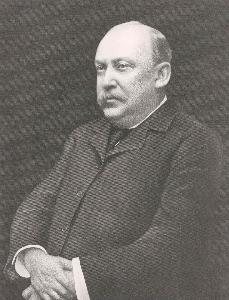 David Thompson Watson, named after his great grandfather, was born in Washington, PA (Washington County) on January 2, 1844 to Maria Morgan Watson and her husband, James Watson, a noted attorney.

Watson was born into the field of law, having a grandmother whose niece was an early Chief Justice of the State Supreme Court and also was governor of Pennsylvania. There were several other relatives who were lawyers, including two of his uncles, and of course, his father, James Watson, a distinguished member of the Pennsylvania Bar.

Watson attended Washington College from 1858-1864, and also during that time served 8 months in the army. He then enrolled in Harvard Law School in the Spring of 1865 and graduated in the autumn of 1866. He was then admitted to practice law in Suffolk County, Mass., but returned home to his father’s law office and began practicing in Washington County. After remaining in Washington for a short time, he relocated to Pittsburgh, the thriving metropolis of the era. It was here that he committed himself to a civil practice, rarely taking a criminal case. Mr. Watson was admitted to the Allegheny County Bar on January 7, 1867 and to the State Supreme Court on November 9th of the same year.

Watson soon opened a law office on Grant Street, where he earned $25.00 for his first case and $14.05 for his second. Soon, however, he began collecting greater fees and more notable clients, including Arbuckle & Company (which became the leading coffee roasting company in America), Second National Bank, Dravo, and the affairs of Maturin L. Delafield, who had married one of the two heirs to one of the first large fortunes in Pittsburgh.

Later in his career, Watson also counseled Andrew Carnegie, W. H. Vanderbuilt, Henry Clay Frick and was part of a litigation team representing the United States in its purchase of Alaska from Russia.

One of the most life altering clients however was William Walker, the president of Farmers Deposit National Bank, who put his personal affairs into Watson’s hands in the 1870s, which ultimately led to the meeting, courtship and marriage in 1889 of Watson to Margaret Walker.

Although they maintained a home on Pittsburgh’s North Side, the Watsons purchased an estate that they called “Sunny Hill” in Leetsdale. The Watsons made several improvements to the estate after purchasing it, including a greenhouse and gate-keeper’s lodge (which remains today). The estate also included a farm with five or six horses, and several dogs roamed the countryside.

The Watsons, although they had no children of their own, took an interest in their well being, especially of crippled children. It was this interest that sparked discussions with Dr. David Silver, the leading orthopedic surgeon in Pittsburgh at the time, to found a convalescent home for crippled girls.

The Watsons’ dream of caring for crippled children became a reality in 1917, when the D.T. Watson Home for Crippled Children was incorporated. The home opened its doors three years later.

As Francis Harbison said in his book, D.T. Watson of Counsel, “The Watsons found in their Sunny Hill, with its beautiful gardens and vine-entwined woodlands, and in their plans to use it for the children who were waiting to be born, the greatest happiness of their lives. They planned its use, endowed their estates when they were gone, in perpetuity, for the care of crippled children. They had tasted the joy of caring for such children for many years and in the contemplation of the continuance of their care, they found great happiness.”